You are here: Home1 / Pistol 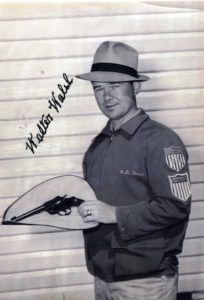 The results of Club Matches (Rifle, Pistol & Shotgun) are regularly updated by the respective match directors. The match & league results may be found on their respective pages using the links above. The results of older matches can likely be found in one of the Club Bulletins in the Members Only Area.
Pictured at left, is long time club member Walter R. Walsh, for whom the Walsh Pistol Range is named after. Walter was an active club member, who passed away in 2014 – only 106 years young! You may read more about him by following this link. 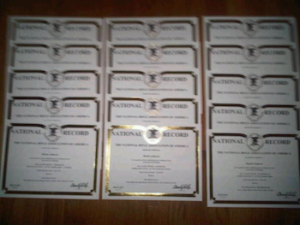 The club is fortunate to have another distinguished pistol shooter as a member, Mr. Martin Johnson. Martin recently broke several records during the 2012 competition year, and has this to say about his recent achievements:
“I found such a tournament in Benton Harbor, Michigan in March. Not only was it an indoor tournament but it was such a tournament that if a record score were fired and ceritfied, it would be an NRA National Indoor Record. I was fortunate enough to establish 13 NRA National Indoor Action Pistol Records that weekend.
“I returned to Berrien Springs, MI which is near Benton Harbor, MI in late May to shoot in a NRA Regional and Michigan State Championship tournament in route to the Bianchi Cup National Championships. I do not have confirmation yet from NRA for the Berrien Springs match, but I should have a National Record coming from that outdoor tournament. Two of the 15 National Records in the photo were earned by me at this years National Championship (Bianchi Cup) in May 2012. Those records are for the Barricade Event and the Practical Event. At Chambersburg, PA in July I broke the National Record established by me at the Bianchi Cup in the Practical Event, and likely added half dozen more National records to the count.
“It must be noted that John Sanders was with me at both Michigan Matches and he also earned a couple National Records in NRA AP. He was also 3rd Grand Senior Overall at the Bianchi Cup. Jon Stoehr and Eric Preble also placed in their divisions at the Nationals, and most recently all three of the U.S. service veteran Club members won or placed in their divisions or classes at the Chambersburg, PA tournament in July.”

Check the Pistol Events in the right column (or at the bottom of the page on mobile devices). If a particular Event is not listed, please contact the specific match director or the Rifle and Pistol Chair.

The registration for the October IDPA match at FXRGC on October 8 is now open. This month we will be shooting several stages that were used during our September state match. We are looking for volunteers to help setup on Friday afternoon before the match. If you can help we’ll waive your fee for the […]

The registration for the July IDPA match at FXRGC on July 9 is now open. The monthly theme is ‘Merica. Remember your Red, White and Blue! We are looking for volunteers to help setup on Friday afternoon before the match. If you can help we’ll waive your fee for the match. We’ll take the first […]